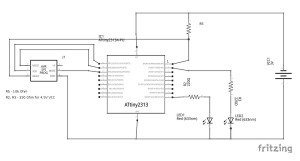 I suppose everyone has to pass through a hardware phase, and mine is now, for which I implemented a LED blinker with an AVRtiny2313. I don't think it even merits the usual blog laydown. Basically all it took was following tutorials to the letter.

For the initial project, I figured that learning gEDA would take too much, so I unleashed an inner hipster and used Fritzing. Hey, it allows to plan breadboards, so there. And well it was a learning experience and no mistake. Crashes, impossible to undo changes, UI elements outside of the screen, everything. Black magic everywhere: I could never figure out how to merge wires, dedicate a ground wire/plane, or edit labels (so all of them are incorrect in the schematic above). The biggest problem was the lack of library support together with an awful parts editor. Editing schematics in Inkscape was so painful, that I resigned to doing a piss-poor job, evident in all the crooked lines around the AVRtiny2313. I understand that Fritzing's main focus is iPad, but this is just at a level of typical outsourced Windows application.

Inkscape deserves a special mention due to the way Fritzing requires SVG files being in a particular format. If you load and edit some of those, the grouping defeats Inkscape features, so one cannot even select elements at times. And editing the raw XML cause weirdest effects, so it's not like LyX-on-TeX, edit and visualize. At least our flagship vector graphics package didn't crash.

The avr-gcc is awesome though. 100% turnkey: yum install and you're done. Same for avrdude. No huss, no fuss, everything works.