The best part, I think, came during the Swift Ops session, when our PTL, John Dickinson, asked for a show of hands. For example -- without revealing any specific proprietary information -- how many people run clusters of less than 10 nodes, 10 to 100, 100 to 1000, etc. He also asked how old the production clusters were, and if anyone deployed Swift in 2014. Most clusters were older, and only 1 man raised his hand. John asked him what were the difficulties setting it up, and the man said: "we had some, but then we paid Red Hat to fix it up for us, and they did, so it works okay now." I felt so useful!

The hardware show was pretty bare, compared to Portland, where Dell and OCP brought out cool things.

HGST showed their Ethernet drive, but they used a chassis so dire, I don't even want to post a picture. OCP did the same this year: they brought a German partner who demonstrated a storage box that looked built in a basement in Kherson, Ukraine, while under siege by Kiev forces.

Here's a poor pic of cute Mellanox Ethernet wares: a switch, NICs, and some kind of modern equivalent of GBICs for fiber. 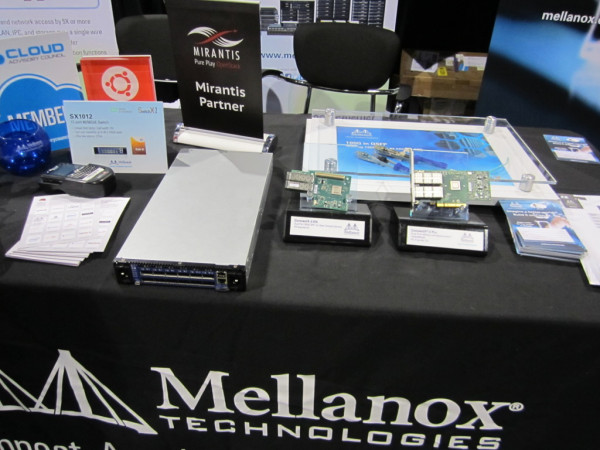 Interestingly enough, although Mellanox displayed Ethernet only, I heard in other sessions that Infiniband was not entirely dead. Basically if you need to step beyond bonded 10GbE, there's nothing else for your overworked Swift proxies: it's Infiniband or nothing. My interlocutor from SwiftStack implied that a router existed into which you could plug your Infiniband pipe, I think.