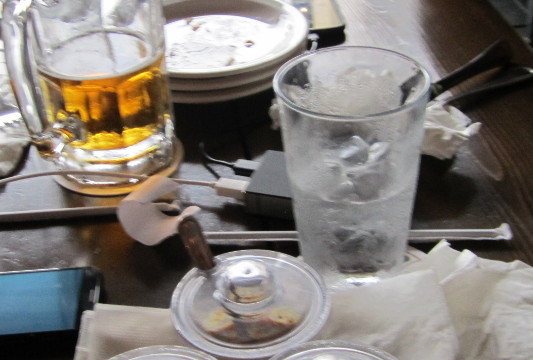 I do not get out often and my clamshell cellphone incurs a bill of $3/month. So, imagine my surprise when at a dinner with colleagues everyone pulled out a charger brick and plugged their smartphone into it. Or, actually, one guy did not have a brick with him, so someone else let him tap into a 2-port brick (pictured above). The same ritual repeated at every dinner!

I can offer a couple of explanations. One is that it is much cheaper to buy a smartphone with a poor battery life and a brick than to buy a cellphone with a decent battery life (decent being >= 1 day, so you could charge it overnight). Or, that market forces are aligned in such a way that there are no smartphones on the market that can last for a whole day (anymore).

UPDATE: My wife is a smartphone user and explained it to me. Apparently, sooner or later everyone hits an app which is an absolute energy hog for no good reason, and is unwilling to discard it (in her case it was Pomodoro, but it could be anything). Once that happens, no technology exists to pack enough battery into a smartphone. Or so the story goes. In other words, they buy a smartphone hoping that they will not need the brick, but inevitably they do.